In addition to the basic medical sciences (such as biochemistry, human anatomy & physiology, immunology, microbiology, pharmacology, etc.) naturopathic doctors receive training** in: **Additionally, several of our schools integrate training in Traditional Asian Medicine (TCM) & Acupuncture throughout the 4-year curriculum or offer a dual-degree program, which prepares the graduate for additional, but separate, licensing in midwifery or acupuncture.

In more recent years our naturopathic schools began to drift away from their foundational understanding of naturopathic philosophy and  became more aligned with the philosophy of allopathic (conventional) medicine. This drift affected not only the curriculum of the naturopathic medical schools, but also the way that naturopathic medicine was taught, modeled, and clinically practiced. In the most basic way, the schools became untethered and eventually departed from the profession's foundational concept, the very philosophical core on which naturopathy was founded - vitalism. Recognizing this drift and the sequelae that would follow, a post-graduate nonprofit Institute (the Naturopathic Medicine Institute) was founded by many of the elders within our naturopathic profession. The Naturopathic Medicine Insitute is dedicated to keeping the concept of vitalism alive and the foundation of naturopathy sure. The elders wanted to make certain that the graduates of today's naturopathic schools had a place to go where they could learn the time-honored and clinically-proven philosophy of naturopathic medicine, as well as how to apply that philosophy within clinical practice. In essence, they wanted a place where current naturopathic students as well as former graduates could go to learn how to "think like a naturopath". Thinking "like a naturopath" is the type of clinical practice which Hoosier Naturopath embraces.


By 1920 the founder of  naturopathy, Benedict Lust, N.D., D.O., D.C., M.D., had developed 4-year residential schools which honored the concept of vitalism; this high level of education with its vitalistic philosophical underpinning stood as the standard for entrance into the naturopathic profession for over a century*. The term "Vitalist" has now been trademarked by the Naturopathic Medicine Institute to represent a way of thinking and practicing naturopathic medicine that reflects the highest standards in medical education and cutting edge scientific discoveries, while honoring our profession's philosophical foundation and still-relevant clinical pearls. Therefore, a true Traditional Naturopath is now called a Vitalist (TM).

For a comparison of curriculum in the M.D. schools and the N.D. schools, please see the chart below.

NOTE: 'Clayton College of Natural Health' closed abruptly in July 2010; they had been in operation since 1980. There are many Clayton College graduates still practicing as NDs. 'Trinity College of Natural Health' is now called 'Trinity School of Natural Health'. Trinity was founded in 1991 by a Clayton College graduate (ND Degree) who also held a Masters of Divinity degree from the Southern Baptist Seminary. Graduates  of Trinity were previously awarded a 'Naturopathic Doctor' degree and are in practice as NDs; in 2017 the ND program was updated, expanded, and renamed the 'Certified Holistic Health Practitioner' (CHHP). In 2020 Trinity's capstone degree became "Certified Traditional Naturopath' which entails an additional 16 weeks beyond the CHHP. 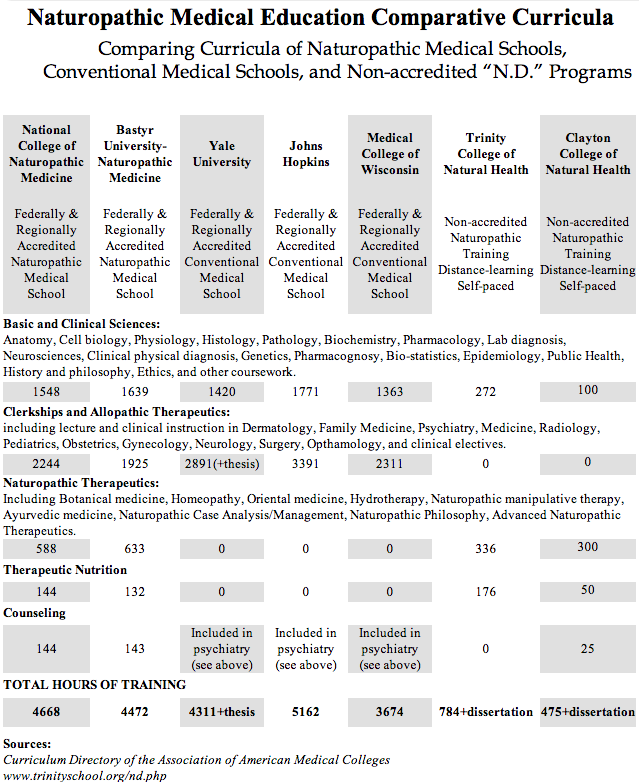